She’s got it locked down

Millie Lovelock picked up one of New Zealand’s most prestigious contemporary music prizes this week. Opportunities for celebration were limited, Tom McKinlay writes.

Millie Lovelock’s win at the Taite Music Awards this week could hardly have come under more unusual circumstances.

She was in Manchester, the award ceremony was being hosted online in New Zealand and everyone involved was secluded in their scattered lockdown bubbles.

So no on-stage high-fives, no guest performances, no embraces for Shona Laing’s career moment after picking up the Independent Music NZ Classic Record award for 1987 album South.

Lovelock’s win was revealed online from a nondescript suburban room by the award presenter’s young daughter while his topless young son competed for attention with an acoustic guitar.

Earlier, she’d been contacted by the award’s producers to get some video.

"They did trick me," she says on the phone from her Manchester flat. "I was told I was just going to do a Zoom call to get some soundbites for the ceremony and they asked me to do an acceptance speech."

Lovelock inquired whether what they wanted was for her to pretend she had won.

"They, said, ‘no you have won the prize’. I thought they were joking. I said, ‘I can’t actually tell. Are you being serious?’." 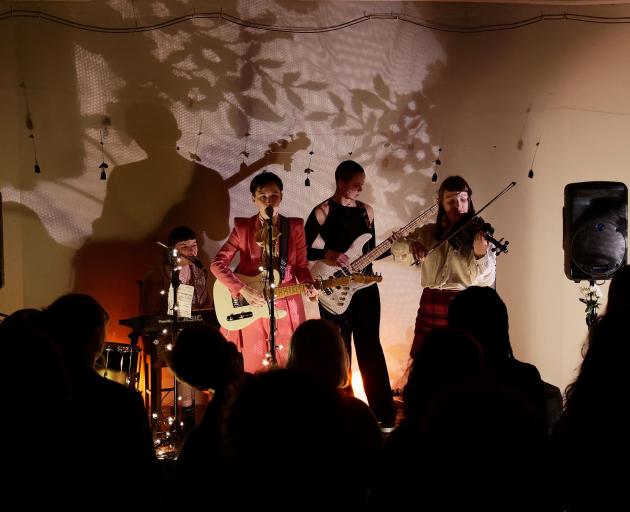 But despite the reassurance, Lovelock, alone and distant in the north of England, thought it might still be an elaborate deception.

After all that, it can be confirmed that Lovelock — formerly of Dunedin, and perhaps previously best known for her part in the band Astro Children (or as a Boomer-baiting Otago Daily Times columnist long before it was fashionable), but probably now for something else — is this year’s Taite Music Prize Best Independent Debut award winner for her album Relief, recorded under her solo-project moniker Repulsive Woman. She celebrated with cake and a Zoom call.

"I think it made the whole situation globally feel that much more surreal as well," she says of the win. "Because something good happens, you feel really excited and really happy and then you realise, ‘oh, my goodness, the whole world is nearly completely unrecognisable at the moment’ and it makes it that much clearer how strange everything is."

Nevertheless, Lovelock has not allowed the madness to drain the special from it all.

"The whole Taite institution to me represents quality songwriting and independent integrity, so to be nominated is very flattering, really."

The awards citation says Relief is "an elusive, guitar-driven exploration of self in the context of modern society. Millie uniquely crafts soothing melodies with intricate lyrics to convey inner-conflicts and societal pressures".

It is fragile and robust at once, with hooks that catch.

"It is really special when you write something that is very personal and other people enjoy it," Lovelock says. "I was really touched putting the record out by the number of people who said to me that they felt moved by it, because I don’t think about that too much when I am doing the writing and doing the recording."

At that time you are centred on your own experience of what you are making, she says.

"Then as soon as you have let it out into the world you realise there are other people who will also be involved in this record by virtue of listening to it."

Lovelock lavishes praise on producer and collaborator Adelaide Dunn for her part in delivering that experience.

"The way she thinks about music is just so unique and beautiful. She has synaesthesia and also perfect pitch, so she has these kinds of augmented experiences, I think, of sound. So she’s very very careful with how she treats everything. Everything has to be in kind of perfect harmony for her, so it was a very slow and gentle process making the album, and I think people responded to that."

Even before that, writing for the album had taken some time, some songs going back years.

"It felt very considered on my part in the first instance."

Lovelock is locked down in her flat of English red brick doing her PhD at the University of Manchester’s Centre for New Writing, broadly, she says, "on social media and intimacy". She’s been there since September last year.

They’re relatively new digs, as her previous lease was running down as the lockdown loomed.

"I moved flat on foot because I didn’t want to have contact with anybody else during this period," she says.

That’s an ongoing process — one suitcase at a time, using the one daily outing everyone in the UK is permitted.

Lovelock is understandably wary of the UK’s loose lockdown, which resembles some sort of compromised Level 3 situation, with restaurants and other outlets continuing to operate.

"I don’t really think it is locked down enough, as represented today by the news of the highest death toll in Europe," she says.

It’s been a frustrating experience watching the UK Government’s tardy response to Covid-19 and continued opacity, she says.

Since landing in the northern hemisphere there hasn’t been a great deal of live music making. There’s a recent lockdown concert post on the Repulsive Woman Facebook page and there was a live concert in Berlin in October, but after last year’s release of Relief and the touring behind it, Lovelock has been happy to recharge.

"I had quite a hectic first half [of 2019], then moved to England in the second half of the year and thought ‘I am just going to have a break’."

There is, however, an EP, recorded since she’s been in the UK — with bass, guitar and string parts written during a bout of the flu late last year.

"Just by necessity, I did all the parts myself in the studio," she says.

"I am not an accomplished violinist but I can do it on a Midi keyboard if it is required of me."

Brooke Singer of New Zealand band French for Rabbits is involved this time, helping with production.

The plan is to have it out sometime this year.

With a bit of luck, there may even be the opportunity to do some gigs.

"Even if it is just within the United Kingdom for now. Who knows? Hopefully things will start to get a little bit better at least."

Which brings us back to that Taite prize, as Lovelock walked away with both some cash and "a live performance opportunity thanks to Auckland Live".

"I presume it will now be from the comfort of my flat," she jokes, wryly.

The winner of the Taite Music Prize 2020 was Troy Kingi for his album Holy Colony Burning Acres.

Murray Cammick won the Independent Spirit Award for his contributions to music through photography and journalism.

Repulsive Woman’s album Relief is available for download from the Bandcamp page.